Sleepaway Camp III: Teenage Wasteland continues the campy fun turn the first sequel took. It was filmed back-to-back with the same creative team and locations. The film is follows Angela Baker as she works her way into a camp mixing privileged and troubled teenagers, and then kills them off one at a time for bothering her. The film was made near the tail end of the slasher series fad. Filming began on October 12, 1987, and ended on October 31, 1987.

Angela Baker returns to her old killing grounds, this time disguised as a delinquent teenager at a camp for troubled and privileged teens to work together. When she doesn't immediately fit in, Angela resorts to murdering campers and counselors alike. Can the police officer who arrested her at Camp Arawak - also the father of a previous victim - stand in her way, or will Angela complete her deadly mission?

Maria Nicastro wakes up in New York City and heads off to camp. She is chased into an alleyway on her way to the bus station and run over by a garbage truck driven by serial killer Angela Baker. Angela is dressed like Maria and has cut her hair to match. Equipped with a fake ID, Angela assumes Maria's identity and takes her place on a bus headed to Camp New Horizons, a camp where several youths from both upper and lower class areas are to live and work together in "an experiment in sharing."

Arriving at the camp, Angela and her companions meet camp owners Lilly and Herman Miranda and TV reporter Tawny Richards, who interviews the campers one by one for a local news segment. Tawny is sure to mention that Camp New Horizons was once Camp Rolling Hills, where Angela Baker massacred campers counselors, owner, and a citizen just one year before. Lilly tries to keep everything quiet and ushers the kids inside. Before she leaves, Tawny asks Angela if she can get her some cocaine. Angela sneaks into a storage closet in the main cabin and puts some Comet cleanser in some plastic wrap. She gives it to Tawny, who snorts it on her drive home and immediately dies from the poison.

Once the campers are seated, Lilly and Herman reveal they will be split up into three groups and will be camping in the woods for three days. Their third counselor, Officer Barney Whitmore, arrives and Angela realizes him as the man who arrested her at Camp Arawak and the father of Sean Whitmore, one of her Camp Rolling Hills victims. After Barney breaks up a fight between Riff and Tony DeHerrara, the campers change and are put into their groups. Angela heads out to camp with Herman, Peter Doyle, Jan Hernandez and Snowboy. While fishing, Angela grows irritated by Peter constantly setting off firecrackers and returns to Herman's campsite, where she finds the counselor and Jan having sex. Herman attempts to explain the situation, but Angela beats him with a log before impaling him through the mouth and bashing Jan's head in. Angela hides the bodies and tries to finish the night with Peter and Snowboy, but they continue to irritate her. During the night, Angela kills Peter by blowing his face off with one of his own firecrackers and beats Snowboy almost-unconsciousness with a log before burning him alive. She disposes of the bodies in a big campfire.

The next morning, Angela travels to Lilly's camp, telling her that Herman told her to switch with someone.She escorts Arab into the woods and decapitates her with an axe. During a trust exercise organized by Lilly, Angela kills Cindy Hammersmith by raising her up a flagpole and dropping her from the extreme height, having grown tired of the girl's whiny and bigoted behavior. Angela explains away Cindy's absence by saying she was sick and went back to the cabin to lay down. During another trust game, Angela is tied to Bobby Stark, who she tells to meet her at the main cabin later on, claiming she will take care of Lilly. Upon returning to the camp, Angela convinces Lilly to go to the main camp, where she knocks the woman into a hole filled with garbage and buries her up to her neck. She kills her by running over her head with a lawnmower. Later that night, Angela kills Bobby by tying him to a tree and tearing his arms off with the Miranda's jeep. Angela finishes this group by pinning Riff to the ground with tent spikes.

The next morning, Angela approaches Barney's camp and again claims that Herman told her to switch with another camper, in this case Marcia Holland. Barney insists on escorting the two to Herman's camp and Angela sprains her ankle on the trek. They take her to the main cabin to treat her wound and Barney surmises that she lied about having to exchange with another camper. As Angela tells them about how she hated being with Herman and Lilly, due to the former’s pervertedness and unfaithfullness and the latter's laziness, bossiness, and greed, she tells Marcia and Barney that Lilly is just outside. Marcia finds Lilly's decapitated body propped up in a chair and screams. Barney investigates as Angela tells Marcia she reminds her of her old friend Molly Nagle. Barney orders Marcia to flee and confronts Angela, who admits her true identity to him. They share a tense moment, then Angela shoots him with Riff's stolen gun. With Barney dead, Angela chases and captures Marcia in the Miranda's jeep.

That night, Angela meets Tony, Greg Nakashima and Anita Burcham at Barney's camp, telling them that Barney and Marcia told her to bring them to the main cabin. Upon reaching the main camp, Angela ties the three campers together under the pretense of playing a trust game, before revealing that she has murdered Barney and that they have two minutes to find Marcia, who is hidden in one of three cabins. After frantically searching the cabins, the group finds Marcia in the third, where Greg and Anita are killed when they spring a trap. Angela congratulates Tony on finding Marcia, wishes them well and tells them that there is a payphone three miles away that they can use to call for help.

As she enters the Miranda's jeep, Angela is attacked by an axe-wielding Marcia. They struggle on the ground and Marcia gains the upper hand, repeatedly stabbing Angela's stomach until Tony stops her. Later, while Angela is loaded into an ambulance, Tony shares with Marcia his idea to move to Ohio to be with her and she admits that she already had a boyfriend.

In the ambulance, an attending paramedic and police officer discover Angela is still alive and contemplate killing her for all she has done. Before the two men can act on their plan, Angela wakes up and stabs them both to death with a syringe. When the driver asks what's going on back there, Angela replies, "Just taking care of business." 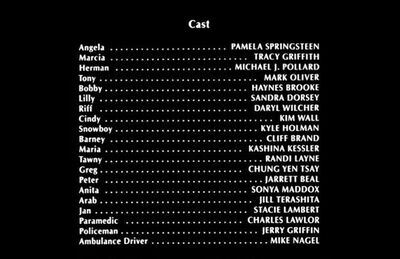 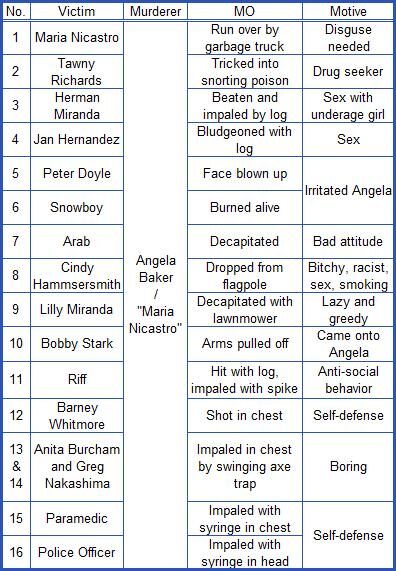 Besides a quick stab to the leg during her fight with Molly in Sleepaway Camp II, Angela Baker never received any wounds or injuries in series except for during the climax of this film, where she is attacked with an axe and knife by camper Marcia Holland.

Actress Jill Terashita previously appeared in Night of the Demons, a cult favorite whose brutal killer was also named Angela.