Hey, Jude! Jude! Jude, is the water still on next door?

Judy: I guess so.

– Meg's last words before Angela stabbed and sliced her in the back, killing her while she was taking a shower, preparing for a date with Mel at 9:30 P.M.

– Meg to Judy about Angela.

All right, ladies. Let's hurry it up and unpack so we can get these chunks the hell outta here. By the way, for those who don't know, the name is Meg. M-E-G.

– Meg introducing herself to the female campers.

That little bitch won't answer me! She never answers me!

– Meg to Ronnie about Angela not answering her before he told Meg to leave her alone.

"Listen, Angela. If you're not gonna participate in our activities, then you just sit there and do nothing. That does not include talking with the boys. You're not a goddamn prima donna, you know? Understand? (Susie: Big deal, she was talking to a boy. Let's just finish the game so we can get ready for lunch.) Yeah, let's."

- Meg berating Angela for talking to Paul instead of participating in the girls activities until Susie intervenes, telling her she can talk to the boys whatever she wants to during a volleyball game.

Meg was a counselor at Camp Arawak, where she got along with the popular girls and had no problem giving Angela Baker a hard time. She was stabbed to death in the shower while preparing for a date with Mel Kostic by Angela as revenge for all the mean things she did to her. Her corpse is then found by Mel and later found by Marie, the other female campers and officer Frank Breton. She is Angela Baker's 4th victim.

Meg was born in 1964, and started working as a camp counselor at Camp Arawak sometime before the events of the film. Meg was a mean bully who allowed herself to side with the mean girls like Judy, rather than step up to them. In fact, Meg was probably worst than Judy as she was an adult who was physically and verbally bullying a minor. She also dated Mel (who was in his 60’s, was rich, and also was mean & shady) and supported the bullying with Judy and threw Angela in the water. Meg was killed in the shower by Angela Baker.

Meg first appears in the girls cabin while she gets everyone prepared to pack in. after that Meg, along with Judy shot dirty looks at Angela after she stared at Judy creepily.

Meg is later seen in the cafeteria complaining to Ronnie about Angela not eating or saying a word in 3 days. Ronnie takes Angela to kitchen and later Ricky asks Meg where she is, she antagonizes Angela behind her back which makes Ricky mad at her and she says if she was more Quiet she would be dead.

Meg serves as the film's tertiary antagonist (after Judy). Her murder is mentioned in the campfire tale told by Phoebe at Camp Rolling Hills in Sleepaway Camp II: Unhappy Campers. 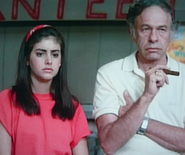 Meg, along with Mel (while he was smoking) watching Ricky and the boys fight at the recreation hall when Ricky, along with Paul was trying to protect Angela from being mocked by Kenny and Mike.

Meg being scolded by Hal after she, cheered on by Judy threw Angela into the water. 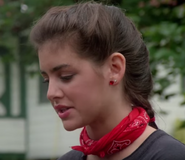 Meg and Judy watching Angela and Paul talking to each other while volleyball.

"That little bitch won't answer me! She never answers me!"

Meg and Judy taunting Angela before Meg threw into the water.

Meg screaming in pain while getting stabbed in the back with a knife by Angela Baker.
Community content is available under CC-BY-SA unless otherwise noted.
Advertisement